Personal Letters From Śrīla Prabhupāda to his Disciples - PDF Download

By reading Srila Prabhupada's personal Letter to his disciples, one is directly associating with Him through his Vani, feeling His presence in his words, thus being instructed and guided by Him personally. These Letters are invaluable for any aspiring Devotee of Kṛṣṇa. You can freely Download these letters now:

His Divine Grace A.C. Bhaktivedanta Swami Prabhupāda would daily write letters to his disciples and important persons throughout the world. He ran his international society mostly by letters. By studying and reading these letters we can have tremendous insight into the practical workings of what Śrīla Prabhupāda envisioned and instructed for his society, as well as gain personal realization by how he dealt with his disciples, for his fully self realized instructions were meant to be studied by the whole world for the next thousands of years.

If you prefer the original scanned letters instead of those from
the published book, than you can download them below: 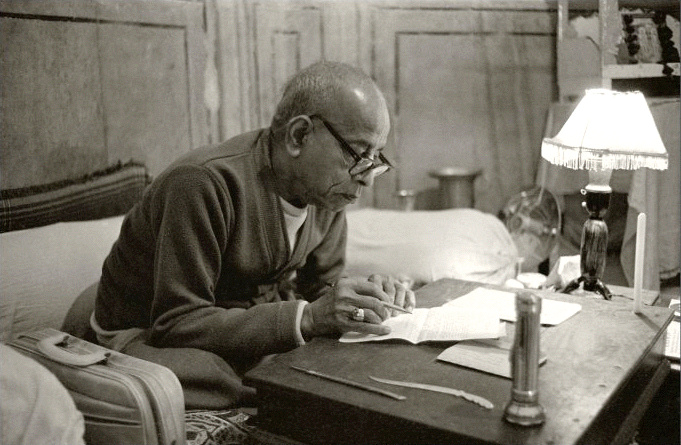 It was simply a matter of time before these letters would be published. After the departure of His Divine Grace A. C. Bhaktivedanta Swami Prabhupāda, the Founder- Ācārya of the International Society for Krishna Consciousness, there was a coordinated endeavor to publish his biography; funds and human resources were made available for this purpose. But many of his followers wished that similar facilities had been given for the publication of his correspondence. Although the Bhaktivedanta Book Trust initiated a program to gather and preserve a complete collection of the letters, no attempt was made to make them widely available. Almost ten years later, this has remained the BBT policy.

For guiding ISKCON and educating devotees after Śrīla Prabhupāda’s disappearance, the importance of the letters is indisputable. They contain the timeless teachings of a pure devotee to his disciples. It is interesting to note the many pertinent instructions on conducting ISKCON affairs in his absence. Many major mistakes within the Movement could have been avoided by a more widespread dissemination and thorough understanding of these letters. In addition, this journal offers the new generation of devotees the personal association of His Divine Grace, thus giving them an opportunity to gain a transcendental sense of judgement and the ability to recognize true Krishna Consciousness. Therefore, the need to make the letters available to all is unquestionable. We hope that all devotees will welcome this journal as an important contribution to Śrīla Prabhupāda’s Movement.

Every effort has been made to present the original material unchanged, even with regard to incorrect spelling, punctuation, and grammar. These letters are archival; therefore, in order to facilitate devotees and scholars in their research, it was felt that it would be inappropriate to edit or “correct” the text in any way. However, letter headings and addresses have been shortened in order to save space.

We want to thank all the devotees who made their private collections of letters available for this publication and those who worked selflessly sorting them and producing the books. They are too many to name here; however we would like especially to thank Niscinta Prabhu, Govinda-bhāṣya Prabhu, Rasamanjari devī dāsī and Amṛta devī dāsī for their contributions and assistance in making this publication possible.  [from the Preface]