Śrīla Prabhupāda: "Not that you take the place of the guru. That is nonsense, very dangerous. Then everything will be spoiled. As soon as you become ambitious to take the place of guru—gurusu nara-matih. That is the material disease.” (Srila Prabhupada Conversation, April 20th, 1977)"

Srila Prabhupada: “Someone Has Poisoned Me”

The Facts About Srila Prabhupada's Poisoning

Śrīla Prabhupāda: "And as soon as he learns that Guru Maharaja is dead [or dying], ‘Now I am so advanced that I can kill my guru and I become guru.’" - "The poison is personal ambition"

Śrīla Prabhupāda: “They wanted to create artificially somebody acharya and everything failed. They did not even consider with common sense—that ‘If Guru Maharaja wanted to appoint somebody as acharya, why did he not say? He said so many things, and this point he missed? The real point?’

And they insisted upon it. They declared some unfit person to become acharya. Then another man came. And then another—‘Acharya!’ Another—‘Acharya!’ So better to remain a foolish [simple] person perpetually to be directed by Guru Maharaja. That is perfection. And as soon as he learns that Guru Maharaja is dead [or dying], ‘Now I am so advanced that I can kill my guru and I become guru.’ Then he’s finished.” (Srila Prabhupada conversation, 16 Aug 1976) 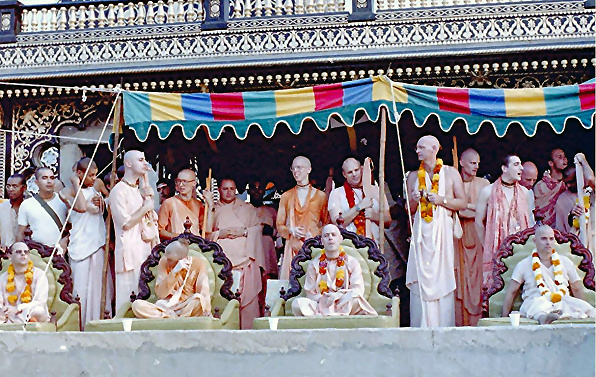 “However, one should not imitate the behavior of an advanced devotee or maha-bhagavata without being self-realized, for by such imitation one will eventually become degraded.” (Nectar of Instruction, Verse Five, Purport)

“As soon as a foolish disciple tries to overtake his spiritual master and becomes ambitious to occupy his post, he immediately falls down.” (SB. 5.12.14, Purport.)