Bhagavad Gītā As It Is - Original 1972 Macmillan Complete Edition

This beautiful hardcover original Bhagavad-gītā As It Is, is published by
KBI Krishna Books Inc. -- and available for purchase from KrishnaStore 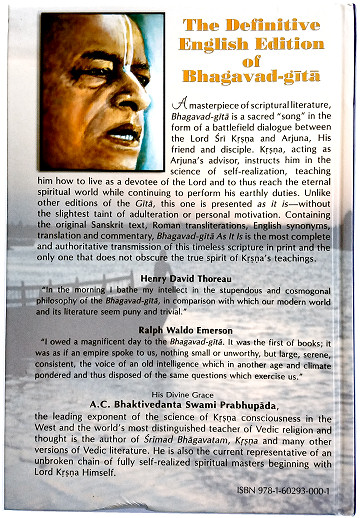 "This knowledge is the king of education, the most secret of all secrets. It is the purest knowledge, and because it gives direct perception of the self by realization, it is the perfection of religion. It is everlasting and it is joyfully performed." (Bhagavad Gītā 9.2.) 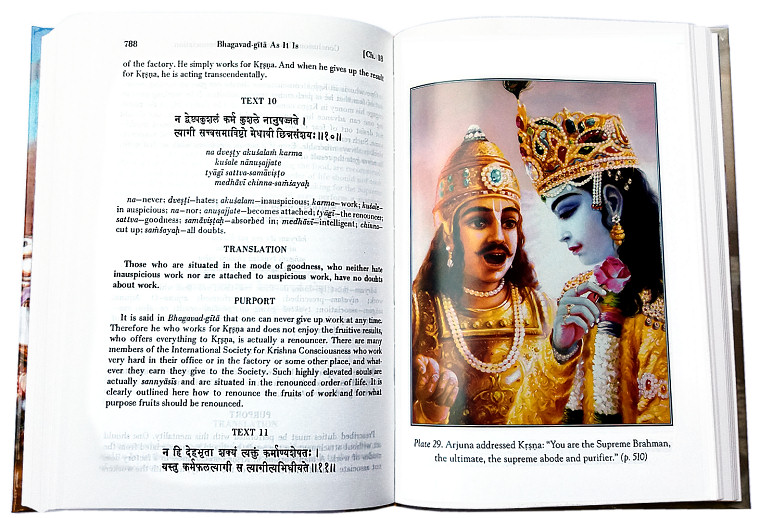 Original Hardbound Bhagavad Gītā As It Is - MacMillan Complete Edition 1972
Bhagavad Gītā As It Is is the largest-selling, most widely used edition of the Gita in the world.With translations, original Sanskrit and English word meanings and elaborate purports by His Divine Grace A.C. Bhaktivedanta Swami Prabhupāda. No other philosophical or religious work reveals, in such a lucid and profound way, the nature of consciousness, the self, the universe and the Supreme. Śrīla Prabhupāda's Bhagavad-gītā introduced Kṛṣṇa to the whole world.

Śrīla Prabhupāda: Originally I wrote Bhagavad-gītā As It Is in the form in which it is presented now. When this book was first published, the original manuscript was, unfortunately, cut short to less than 400 pages, without illustrations and without explanations for most of the original verses of the Śrīmad Bhagavad-gītā. In all of my other books—Śrīmad Bhāgavatam, Śrī Īśopaniṣad, etc.—the system is that I give the original verse, its English transliteration, word-for-word Sanskrit-English equivalents, translations and purports. This makes the book very authentic and scholarly and makes the meaning self-evident. I was not very happy, therefore, when I had to minimize my original manuscript. But later on, when the demand for Bhagavad-gītā As It Is considerably increased, I was requested by many scholars and devotees to present the book in its original form, and Messrs. Macmillan and Co. agreed to publish the complete edition. Thus the present attempt is to offer the original manuscript of this great book of knowledge with full paramparā explanation in order to establish the Kṛṣṇa consciousness movement more soundly and progressively. (Bhagavad-gītā As It Is - Preface) » more here «